Answering my own question 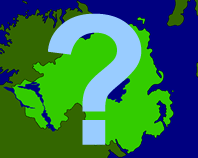 When I arrived in Belfast I wanted to come with no pre-conceptions. I wanted Belfast to speak for itself without the baggage attached to it from the subconscious of having seen it feature so much on TV news during my childhood.

I asked the question is Belfast now fully open for business?

I don’t think its a question that just two days can answer, but at the same time I’ve been able to get a taste of where the answer may lie.

Yes, the shops are gleaming, the cityscape stunning and the future rosy. But at the same time the gleaming shops are the same ones which line the street of every town in Britain. M&S, Carphone Warehouse, Next, Orange, Debenhams. I had hoped that Belfast would buck the trend of other cities in the UK and not be an identikit city. Sadly if you were to read out the names of the shops on the main street it would be impossible to tell if you were in London, Edinburgh, Cardiff, Manchester, Liverpool or Belfast.

In places there is that hint that there is more under the surface. There are no Irish theme bars, just Irish bars. Some of the shops don’t have branches in London, but they do in Dublin and Cork, and in the streets lots of the cars bear number plates from Ireland.

Perhaps best not to compare

Over the last few months I have visited two places which have been torn apart by ethnic tensions and fault lines between religions.

In one, now peace has returned, the two communities have started to work together to repair the damage of war and turmoil. They have used the cooperation to build up their tourism industry and return their community to peaceful cohabitation.

One is a former war zone, the other is part of my own country.

Bosnia was torn to pieces with ethnic Serbs, Croats and Muslims fighting each other, committing atrocities that brought back memories of the worst of World War II. In Mostar the Croats blew up the bridge that linked the Croat and Muslim community in an attempt at ethnic cleansing.
Today, the bridge is restored and the communities are now only rivals when it comes to building the largest religious building.

In Northern Ireland, the peace lines still exist, the police stations are still heavily fortified and the suburbs of Belfast and the towns along the coast are still referred to as Nationalist or Loyalist.

The most shocking sight is that of the gate in the peace wall half way along Townsend Street, closed each evening to separate the Communities of the Falls Road (Nationalist) and Shankill Road (Unionist).

Given all the talk of peace and reconciliation within Northern Ireland it is slightly scary, and sad, to see that the two communities are still so separated.
Posted by Tom at 16:12 No comments:

The fleck of silver 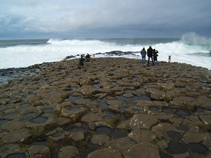 There is a saying that in every cloud there is a silver lining. The cloud that has surrounded Northern Ireland for the last 40 years or so has been so dark that it is hard to imagine that there could have been anything good to have come out of it.

But with tourists scared away by the threat of violence the over development and “Disneyfication” of the areas natural sights has never taken place.

Anywhere else in Europe something like the Giants Causeway would have a “visitors experience” there would be a stonking entrance fee and you would only be allowed to see the rocks from a distance through fear that all those tourists feet would damage the site.

With the tourism industry in Northern Ireland only now starting to get into full swing they have been able to see how people have made mistakes elsewhere and avoid the worst of them. Added to that there are still not the number of tourists that an area as naturally stunning as the North Antrim coast should expect to get.

It’s still free to walk right up to, and onto, the Giants Causeway, certainly the most spectacular natural feature in the British Isles, probably in the whole of Europe.

It’s perhaps the most beautiful silver lining, it’s just a shame that the cloud is there in the first place.
Posted by Tom at 22:46 No comments:

The dividend of peace

I didn’t want to come to Belfast with any pre-conceptions. For so many years in my childhood the streets of Belfast had featured on the evening news, for all the wrong reasons.

For the last couple of years, with the only fights being verbal and between politicians, Belfast so rarely features on the national TV that you would almost think the place didn’t exist any longer.

Where as in the past the blue lights of an RUC police car would have light up the streets of the city centre, as the army went to defuse a bomb. Today, the streets are lit by the blinking lights from all the cranes which are renovating and rejuvenating the city centre.

With the gleaming shopping centres, stylish waterfront, and imposing city hall, is Belfast now fully open for business?
Posted by Tom at 22:55 No comments: