It wouldn’t be Italy without it 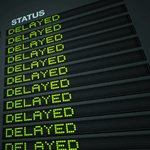 So far on my trip the public transport had behaved itself admirably, every boat on time, every route running correctly. It felt almost Swiss.

Then today, the transport system disintegrated. I’m not certain why, it’s a Tuesday, so its not as if it is the weekend, or the start of the working week. The weather, whilst not being as great as the previous few days, was still OK, the lagoon no choppier and the canals not noticeably higher or lower. There didn’t appear to be any more tourists that there had been yesterday, and yet everything stopped working.

The “next boat” boards which had previously been happily displaying the times of the next services were now all replaced with a message “Servizio Irregolare”, queues were building up at all the stops, and none of the boats appeared to be going to where they said they would.

It was so refreshingly like the Italy of my childhood, and the everyday occurrences of life in London!

Perhaps the transport authorities in the UK could learn from this. Rather than having information systems which keep displaying trains that either left or were cancelled two hours ago, or having everything flashing “Delayed”. Perhaps, in Italian style, when the service goes wrong, just bring out the Gelati, crack open the Chianti and put up “Servizio Irregolare” on the indicator boards.
Posted by Tom at 18:42