I changed my mind, I’m glad I did 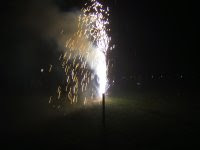 Just after my last posting the weather took a sudden and dramatic turn for the better.

Where there had previously been blankets of cloud, there were now snow capped mountains bathed in the red glow of a summers setting sun.

With that kind of backdrop how can you not go out to watch the fireworks and the festivities?

I arrived just as the children’s lantern procession was leaving the cathedral near the hotel and followed it to the centre of town. There with a bratwurst and a beer I stood and took in the amateur fireworks demonstrations that locals were putting on. It appears in Switzerland that anyone can buy quite powerful fireworks and just set the off.

At exactly 10pm (well this is Switzerland) the main show began and it was spectacular.

It may not have been the most intricate, or the most elaborate display I have ever seen, and it wasn’t choreographed to music. Instead, the intensity of the light and sound from the fireworks bouncing off the alps was tremendous, almost deafening.

The show lasted about 25 minutes, at the end of which I was convinced I was deaf, and that somewhere, perhaps many places, in the Alps, what little snow still remained was being shaken from the mountain tops.
Posted by Tom at 22:04