You wanted a tour; we’ll give you a tour 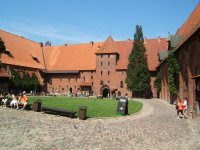 I’ve been to my third site in Poland where you have to go on either a compulsory, or advisory, tour.

The first was at the Salt Mines in Wieliczka, you had to go on the tour so you didn’t get lost, the second was at Auschwitz - Birkenau in Oświęcim, where it was recommended to go on a tour to fully understand the site (and in some ways offer an element of support for what is an emotionally draining location) and the third was today at Malbork castle, where you have to go on a tour if you want to get in!

Whilst the three tours all had very different reasons for existing, they all had one thing in common, the length.

These were epic tours lasting around the three hour mark. Everywhere else I have been guided tours last just over an hour, or at most 90 minutes (see for example the guided tour of the Vatican Museum, though if you include the two hour wait to get in…)