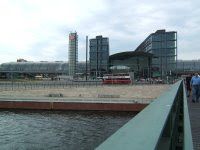 The thing that keeps striking me about the city is how much it keeps changing. Spaces which were the wasteland of the old death strip at Postdamer Platz in 2004 became home to gleaming office blocks and parks by 2006 with only a few vacant lots. Today, even those lots have gone, as have some of the buildings put up by 2004 to be replaced with even newer even shinier buildings.

Across at the Huptbahnhof the story is the same. In 2004 there was just a small S-Bahn station called Lehrter Stadtbahnhof. This was surrounded by acres of wasteland and a drab and frankly scary looking bit of the river Spree.

In 2006 construction work on the Hauptbahnhof was nearing completion (it opened a few months after I visited and just a couple of weeks before Germany hosted the World Cup, the absolute deadline for the completion of the project), but the site was still a mess.

Today the stunning station with it’s graceful glass roof and cavernous interior is surrounded by parkland, the area to the Reichstag a green walkway through the city, and the Spree with cleaned bridges and walkways boasts riverside bars and even a beach.

Meanwhile in London plans for a Beach on the Thames have quietly faded away since the change of administration at City Hall. It took nearly eight years to get, nowhere.

Come on London, If Berlin (a city that is almost Bankrupt because of all the rebuilding costs) can achieve all this so can you!
Posted by Tom at 21:55